Location and Guide to Southwick Village

Southwick is off the B2177 just north of Portchester and close to the boundary of the City of Portsmouth, in the county of Hampshire. The D-Day Memorial Hall is located off Priory Road, behind the Golden Lion pub. It is a two minute walk from the church of St James’ Without The Priory Gate, close to St Nicolas Church, South Boarhunt  and a 10 minute drive from St Mary’s Church, Portchester Castle.

The village is served by excellent major road links nearby, the A3 direct to central London and the M27 South coast motorway (Junction 11 or 12).

Nearest railway stations are Portchester (1.75 miles) and Cosham (5.75 miles). Havant is on the main Portsmouth/London Waterloo or London Victoria line. Portchester is on the Southampton/Winchester line. 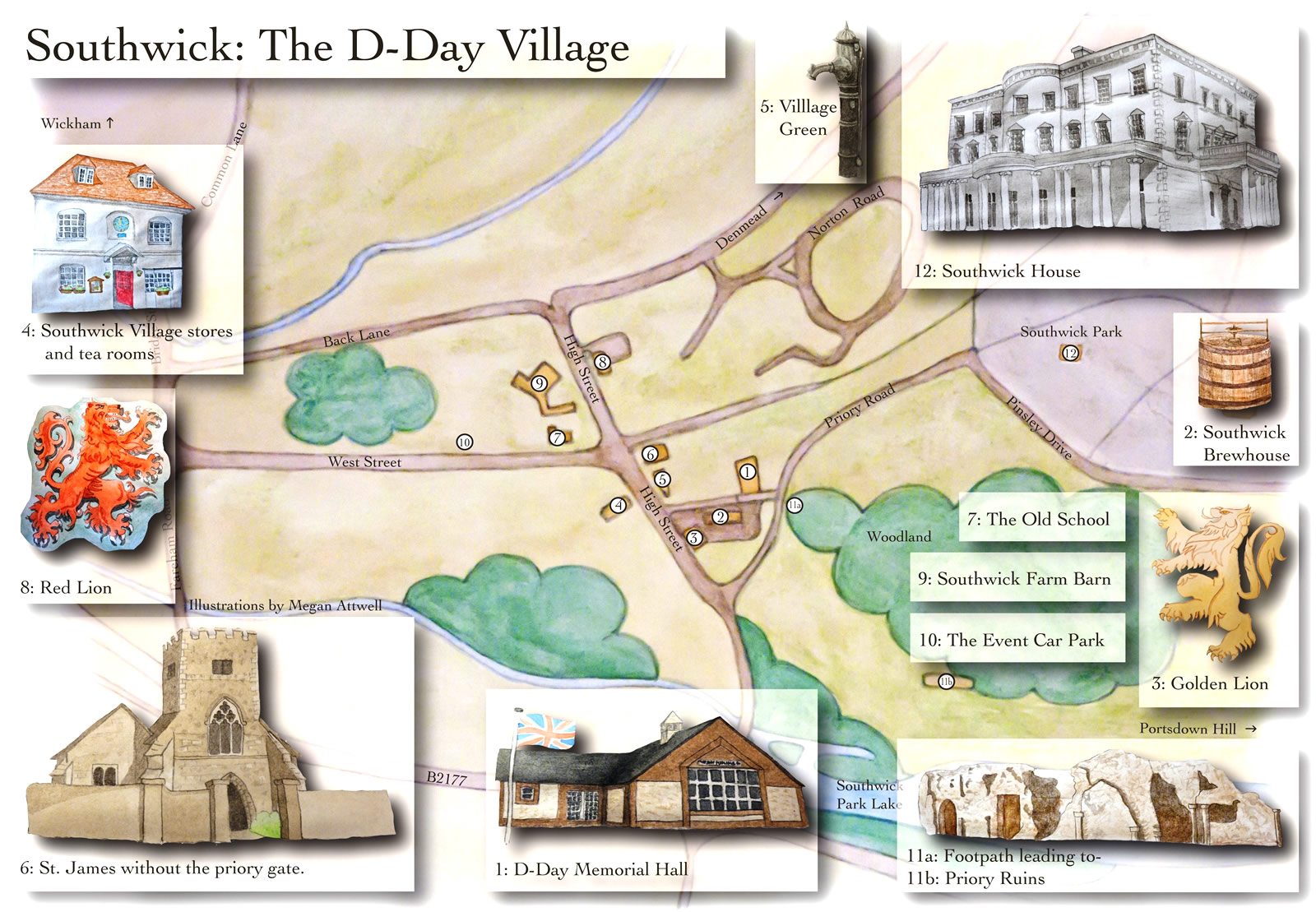 The D-Day Memorial Hall (1) was built in 1995 thanks to the efforts of the Southwick community the previous year, the 50th Anniversary of D-Day.

Southwick Brewhouse (2) is a Scheduled Ancient Monument, being a unique example of a Victorian steam brewery and complete with all the brewing equipment. Now a Real Ale Shop and brewery museum, it was built to supply the adjacent Golden Lion public house, (3) one of two Inns in Southwick. The Gold Room in the Golden Lion (so called because of the colour of the furniture) was frequented by both Eisenhower and Montgomery during their time at Southwick House.

A barmaid at the time recalled how they would order their drinks from the single bar and settle themselves into the comfortable Lloyd Loom chairs in the corner to the left of the fireplace. Ike would drink half-pints of bitter while Monty, a teetotaller, drank only mineral water. Habitually they would arrive in the late morning and would sometimes spread documents and maps on the small table before them.

It is interesting to speculate that perhaps the final pieces of the great jigsaw were put into place in the mid-day quiet of an English village pub.

Southwick Stores and Tea Rooms (4) Reopened in April 2017 after a complete renovation of the shop, tea rooms and gardens. The shop has a wide range of local fresh and frozen produce as well as household items and cupboard fillers. The fully equipped kitchen provides the Tea Rooms with hot and cold breakfast and lunches as well as delicious teas, coffees and cakes. The Liberation of Europe map, which has been produced by local artist Megan Attwell, covers the whole of one wall of the Tea Rooms.

The Tea Rooms are open seven days a week, 10am – 4pm Monday – Friday and 9am – 4pm Saturday and Sunday

Opposite is the Village Green in the centre of Southwick village which still retains the original pump which until the 1920s was the source of domestic water for the adjacent houses. Southwick Village Green (5) was the site of an annual fair, established in 1234 and which continued until the mid 19th century. The village church of St James Without the Priory Gate (6) is unusual in that it is a ‘Peculiar’. It is privately owned by the Estate Landlord (the Patron) and is outside the jurisdiction of the Diosecan Bishop. The Elizabethan alter table is of particular interest.

The former Southwick village school, (7) now converted into private offices in West Street became, in the run-up to D-day, a venue for military briefings and press conferences. These were slotted into the normal school day with the pupils transferring to another building in the village whenever the military required the classrooms.

The Red Lion (8) public house is in High Street. Until the early 1980’s it held a licence to serve only beer and cider, as the Squire of the day was concerned about the well-being of her Estate workers who drank there. During the war it was run by Horace (Hoppy) Crook whose brother, Percy, was the tenant of ‘Southwick Farm’ opposite.

The timbers in the Southwick Farm Barn (9) have been dated using dendochronology to 1494 AD, two years after Christopher Columbus discovered the New World!

In the Revival event car park field (10) air raid shelters were installed for the protection of the school children. When the warning siren was sounded the children were led from the school, continuing their lessons in the safety of the bunkers dug into the ground, until the ‘all clear’ was heard over the village. (Parking on Revival weekend only)